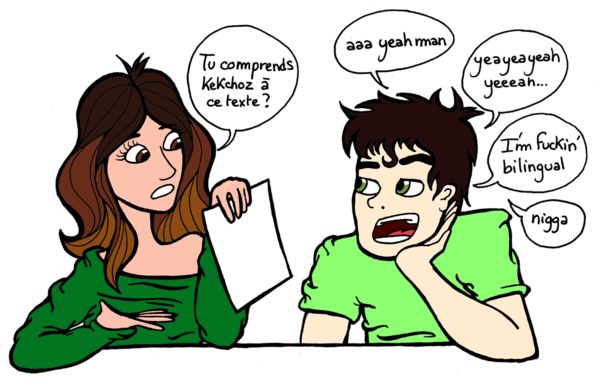 In this excerpt from Midnight's children, Salmon Rushdie relates the birth of two newborn children at the very moment of the independence of India, on August the fifteenth in 1947, one in a rich family, the other in a poor one, and the deliberate exchange of the two by a midwife. The action of delivering a child at midnight on such an important date builds, all along the text, a tension filled with symbolical aspects. This tension relies on two main devices : the binary time of the story and of the characters, and the transmission of a stressful atmosphere. To what extent is the text rhythmed  by some kind of prophetic duality which permits to insert fiction into history and even, to melt them ? First, the structure of the text marries the duality from which the characters are trying to free themselves and fulfils the process of tension to symbolize the historical transition. But, secondly, the time of the narration questions the vision of future and highlights the fact that the flow of history is changed by a metareflexive look upon it.

First, the simultaneousness of two times brings a tension. But the confusion of its rhythm is a metaphor of India and its history. That is why the dualist pattern is omnipresent in the text.
What is striking in the text is the fact that two scenes are embedded in the same diegesis. The first one concerns the delivering of the narrator himself and the story of his birth ; the second one is the direct announcement of India's independence by a "wiry man" (l. 16) which ceases the whole text. But both scenes are simultaneous : one is historical, the other fictional. Therefore the story seems all the more real since it is linked with history. In the second paragraph for example, the profusion of time-markers such as "while", "when" and "now" shows that everything is happening at the same time. This is not an alternation between the two events : they are melted and related at the same time. The relation between story and history is maintained by the direct speech which interrupts the diegesis and establishes a correspondance between the independence of India and the birth of the two babies.
Thus, in the mere structure of the text with these two events linked, the reader is made to understand that something special is about to occur to the two babies, since the beginning of the text. The confusion of both events is reinforced by a strong insistance on the noise. The association of various noises brings a cacophony in the atmosphere : "women wail and shriek" (l.7-8), "the monster roars" (l. 16), "more yells, cries, bellows, howls" (l. 19), "the din of independence". All theses different sounds are melted so that the reader may hear them, and enables to see the independence of India as a music. The disharmony we first imagined with cries and bellows is actually a harmony between each element of the atmosphere described, as if there were a variety of sonorities in only one sound : the sound of independence. And what is odd is that independence is associated with sounds. Sound is something globally harmonious but impure, because one sound, such as a note from an acoustic instrument, is made of an infinity of other sounds, maybe disharmonious. That is the reason why we can see in the sounds of the text a metaphor of India, a free country, but still a federal country, never totally unified ; and a metaphor of the outcome of the text : the artificial building of two new families and the association of bloods.
This impurity fulfils the process of tension ans even arouses some suspense because the narrator is constantly inserting some dualism in symbols and in the diegesis. The setting itself reveals this dualism. For the sake of argument, there are two doctors, two wives, two fathers, two babies. There might be a symbolic interpretation of this omnipresent number two : "this is two minutes to twelve" (l. 1). The text begins by a formal binary and ends on a binary which is more subtle : the melting of the indentity of two human beings. This melting of a dualism is a metaphor of the events that are ocurring on a larger scale : "we step out from the old to the new" (l. 23). The movement from oppression to liberty, from silence to expression ans utterance, is obvious. The vision of India might appear quite dualist : it was bad before, it will be good after, even though the melting of contrary nations avoids the Manichean conception of India, nuanced by the agency of language.

But the language questions the vision of history through the eyes of the narrator. The narrator's voice biases the reader's interpretation. The setting and objects are the receptacle of tension because they are the key of events.
The narrative voice gives indications on what happens next : "not knowing..." (l. 28), "even though...." (l. 30), "despite everything" (l. 32). So there's a clear emphasis on a particular fate, as if he were predestined, highlighting the opposition between what is the result of fortune and  what resorts to a choice. For instance, at line 51, the mother seems all-mighty with "two lives in her power". This paragraph marks a rupture in the text because she's suddenly alone and silent, and corresponds to the anticlimax, when the crime is finally comitted and when time suspends its flight. This deceleration in the diegesis is made obvious by the introspection of her stream of consciousness which shows through free direct speech. There is an insistance on how calm and lonelyness can change a life, and make someone go from rags to riches. What is strange is that the narrator himself tool the responsability of the crime since he was barely born. He knows his identity is questioned and all the process of filiation is now upset : he becomes a kind of orphan, like a metaphor of decolonised country who have to build their own identity.
The birth of the child is not anly his birth but also India's birth : that is why the prophet's voice intervenes into the diegesis, trhough three ways to relate. First, he uses direct speech to perform the independence of India. The narrator also uses free direct speech : "will she live ? won't she ?" (l. 14), and of course his own voice which announces the future. In the same text, history (past), present and future (by anticipation) are all connected so that the narrator becomes the metaphor of a prophet. The time of telling is more instructing than the time of the diegesis : this is a fictional autobiography. He knows the future at the moment he's telling, and can insert some anticipations inside the past. The text is the receptacle of memory : it is the place of the past but also the place of future. The building of the climax contributes to show he is aware of the future inside the past, by the focus on one very little element : his father's injury, described in a mock-epic style.
There's a great focus on an element of the setting : the chair. One object in the narrative is concentrating the whole arousing of tension : the chair. It is looked for, moved, used, and finally a source of pain., it has a symbolic value, with the noun "the chair" constantly repeated in the text. What is very strange is that there's a kind of emphasis on its fall. There's an acceleration of the fall : "acceleration at thirty-two feet per second" (l. 34) but a deceleration in the text : the event related is quicker than the act to relate itself. It shows how much this simple object changed his life : if the chair hadn't fallen, all the attention wouldn't have been paid only to the father hurt by the chair and Mary Pereira wouldn't have exchanged the babies. The banal object of the daily life becomes the motor of a social ascension. But it is by the very act of narrating his personal story that the narrator drives the fact that all happened because of him. His retrospective look on the past changes the future and somehow perform his own will to be responsible.

To pu it in a nutshell, this text uses language to associate contraries and put together past and future in order to make the reader feel the building of the fiction more realistic, and at the same time, not proportional to the consequences.